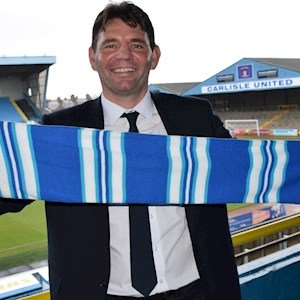 Many thanks to Chris Beech for hosting!

How did you do?

Questions and answers from the quiz below:

1. Identify these two players: They made their debuts for United in an away fixture at Scarborough on the last day of the 1992/93 season, while both were aged 16.

2. Which England international striker made his one and only appearance at Brunton Park while playing for Stoke City in a friendly fixture in August, 1972?

3. When the old grandstand at Brunton Park burnt down in 1953, the subsequent sale of a player helped fund its replacement. Name the player.

5. During the Bob Stokoe era in the 1983/84 season, the Blues created a club record for consecutive home league games without conceding a goal. How many games did they go without conceding, and for a bonus point, which visiting side eventually ended this run?

Answer: Seven games and the run was ended by Barnsley

6. Three different club records were established in the 2016/17 season by Keith Curle’s United. The first was fifteen games undefeated at the start of the campaign, followed by an unwanted record of 24 league games without a clean sheet. What was the third record that was established?

Answer: Most consecutive league games without a goal (7)

Answer: A United player scored at both ends of the pitch in each game. George Oghani in 92/93 v Walsall, Chris Curran in 93/94 v Wycombe and Dean Walling in 94/95 v Wigan

9. Carlisle first got close to reaching Wembley in the 1969/70 season when they got to the semi-finals of the League Cup. For two points, name the opponents in that two-legged tie and the manager who guided United during that season?

10. In May 1986, United faced Charlton Athletic in a crucial fixture for both sides at opposite ends of the Second Division table. Carlisle were leading 2-0 when an unfortunate own goal brought the visitors back into the match. Who scored the own goal, and for an extra point, who was the goalkeeper he managed to lob from 40 yards out?

Answer: Jim Tolmie (on loan from Man City) and the keeper was Scott Endersby

1. Which player had the number 34 shirt?

2. What was the highest attendance at BP last season?

3. What was our biggest win last season?

4. Which player scored our only hat-trick last season?

5. How many last-minute goals did we score last season? (As in 90th minute plus +)

6. Which team did Ryan Loft score an 82nd minute winner against, after Harry McKirdy had equalised to make it 1-1?

8. How many Carlisle United academy graduates made EFL appearances for the club last season?

9. Which centre-forward finished the season with better than a 1 in 2 ratio?

10. In his final Carlisle United season, how many clean sheets in the EFL did Adam Collin keep?

2. Which of my former clubs are missing – Blackpool, Hartlepool, Rochdale?

3. Which of these managers have I not played under – Sam Allardyce, Steve Bruce, Lou Macari, Paul Simpson and Alan Pardew?

4. Who was my first permanent signing for Carlisle?

1. My penalty put Carlisle United top of the First Division in 1974?

2. I made 90 appearances for the Blues and have recently been promoted to Liverpool’s under-18s coach. Who am I?

3. Since retiring from the game which included two spells with the Blues and 220 league games, I have since become an armed police officer, who am I?

4. I played 268 league games for the Blues in goal before going on to play for Brentford, Leeds, Doncaster and finishing up at Lincoln before becoming a prison governor, who am I?

5. I have a number of previous clubs before and after my time with Carlisle including: Darlington, Hartlepool, Spennymoor, Rochdale and Bradford, but who am I?

6. I played for the club on loan from Arsenal and share my name with a famous movie star, who am I?

7. I joined the blues from Northwich Victoria, and went on to play for clubs including Gretna after my time with the club. My son also plays for the Blues at present. Who am I?

8. Prior to managing the Blues, I had spells as Carlisle Assistant manager and a variety of coaching roles at Leeds United, who am I?

9. I am ranked 7th top scorer of the whole of the 1960s. I share this position with Brian Clough.

10. At the age of 57, in the mid-70s I was the oldest Football League manager to be appointed to my first post.

2. Sheffield United are currently flying but, how many players from their squad have a connection to Carlisle United? (Loans and Youth team spells included)?

3. Which player has the most Premier League appearances?

4. Which team is nicknamed the Chairboys?

5. Who is the only player to win the Champions League with 3 teams?

6. How many goals has Wayne Rooney scored for England?

7. Who is the Englishman with the most Premier League games managed?

8. Who has the most caps for the England national team (Female and Male included)?

9. How many times has David Moyes won the LMA Manager of the year award?

10. In the history of the Premier League, who is the top scoring Brazilian? Clue, he has played against Carlisle

1. “I came to Carlisle United as a boy… and at that time it was a hencoop, a glorified hencoop.”

2. “There are many clubs which are under the same financial threat as Carlisle United and the game as we know it is in real danger of dying at the lower levels unless someone acts quickly.” (Clue: A quote from the 1990s)

3. “I can’t see Carlisle ever getting back to Wembley…” (said in 1995 after their first of four visits)

Answer: Stan Bowles (working as a pundit for Border TV)

4. “There’s no spirit in that changing room – they’ve got no male genitalia. They are weak, and we need a reaction.”

5. “I told the players at half time that I don’t like the feeling of the ground, there is no atmosphere and today wasn’t a great day for quality football.”

Answer: Richie Wellens (Swindon manager, after playing at Carlisle in February this year)

😀 Don’t forget to purchase your face in the crowd before 10am tomorrow to make sure you are in Brunton Park to ‘watch’ the Barrow game!

Our board members have been have been busy ordering their FITC, have you ordered yours yet ?

Remember the deadline to have your face in the crowd for Saturday's game is 10am tomorrow.

All @officialcufc supporters, Thursday 10am is the cut off point for @stadiumfaces Face In The Crowd orders. If you want your #faceinthecrowd for the home game vs Barrow on Saturday visit https://www.faceinthecrowd.store/home/23-carlisle-united-fc-fan-visual.html ASAP! #cufc #CarlisleREUNITED

It felt great to be one of the privileged few going…

Face in the Crowd

Be here in spirit Back the Blues Carlisle United Football Club…